CovRadar is a tool for molecular surveillance of the Corona spike protein. The spike protein contains the receptor binding domain (RBD) that is used as a target for antibodies and vaccines.

The CovRadar webservice offers several analysis tools which are described in the following sections. The blue info buttons above the generated plots can provide additional explanations. 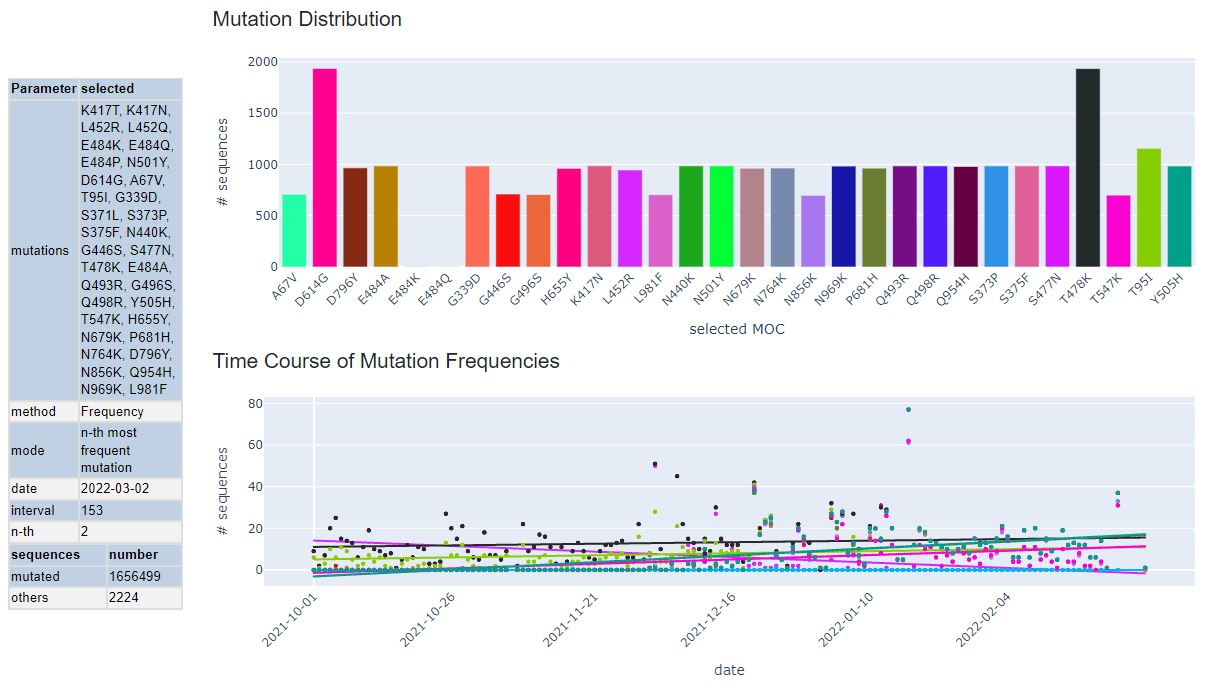 The interactive map shows the spatial distribution of selected mutations within a given time span. If mutations are present, the plot displays a central data point for each country. For the German sequences exclusively, the zip codes of the sequencing labs (not the location of the patient) are available, which are used to provide a more precise spatial distribution for Germany.

Clicking on a data point triggers the subplots to show additional information about the mutation distribution and the time course of the mutation frequencies for a specific region.

The data distribution plot provides an overview of the available genome sequences per calendar week and country.

This allows to identify over-/underrepresented countries in the dataset (and thus in the "Global" option in the other plots). 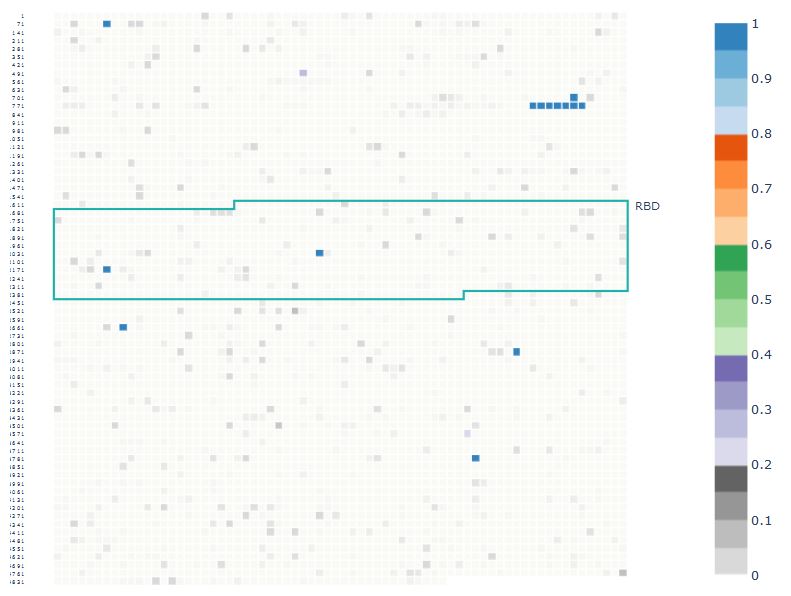 In the alternative allele frequency plot each block represents a nucleotide in the multiple sequence alignment (MSA) of spike sequences. The coordinates on the y-axis are related to the MSA position.

The color shows the alternative allele frequency of the selected sequences compared to the selected reference sequence. The dafault reference is Wuhan-HU-1 (NC_045512.2).

The mouse tooltip shows the MSA, spike position and codon position, the frequency and coverage, and, if selected, the MOC at this position.

Positions followed by a dot and an integer indicate insertions in the MSA and gaps in the aligned Wuhan sequence, respectively. Coverage means how many sequences are used for retrieving the frequency at this position.

Note, that degenerated bases for which it cannot be clearly determined whether they are an alternative allele or not are excluded. 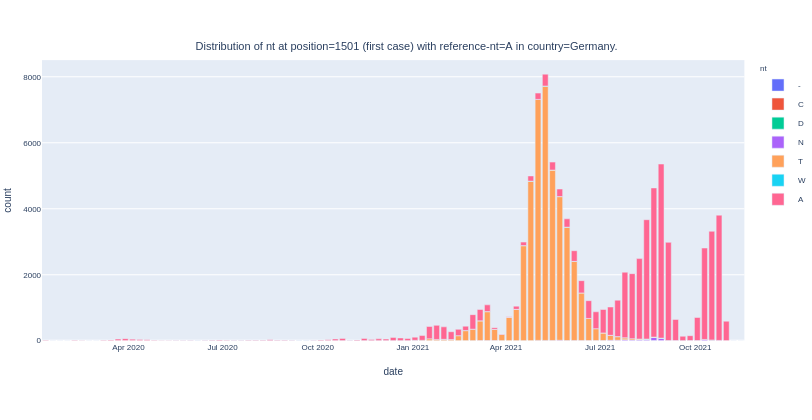 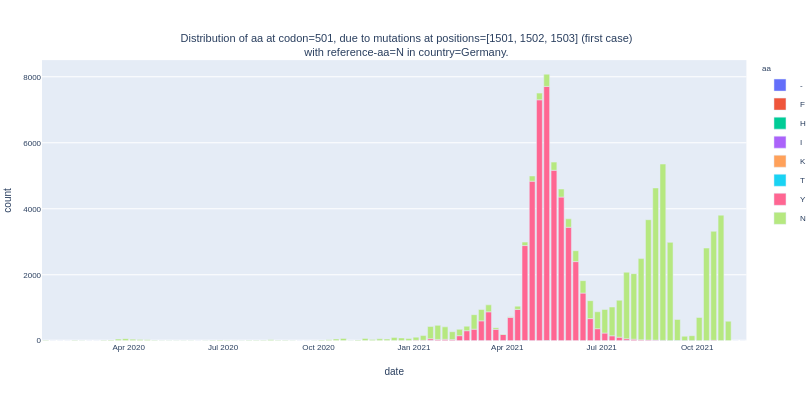 Note that not every nucleotide change results in an amino acid change. For degenerate bases, only unambiguous amino acid changes are displayed, otherwise they are treated as reference. Insertions cannot be shown yet. The colors between the two plots are unrelated.

The table reports changes in consensus compared to Wuhan-Hu-1 (NC_045512.2) for each calendar week.

If the consensus base matches the reference base, it is marked with a dot. Deletions are marked by "-". Next to the calendar week is the sequence coverage. For each position the number of sequences supporting that base and the translated amino acid is provided.

Note that these are the browser versions we specifically used for testing. Older versions will likely also work. Mobile browsers and Internet Explorer are generally not supported.

What is the difference between nucleotide, codon and amino acid?

A nucleotide is a building block of DNA and RNA. DNA consists of the four nucleic bases A (Adenine), G (Guanine), C (Cytosine), T (Thymine). In RNA there are A, G, C, and U (Uracil). A codon is a sequence of three nucleotides that are translated into an amino acid. Which codons translate to which amino acid can be determined using the codon sun. Proteins are built from amino acids.

Why is T used instead of U even though SARS-CoV-2 is an RNA virus?

SARS-CoV-2 is an RNA virus, however, sequencing occurs after conversion to double stranded complementary DNA, that is why the sequencer outputs T instead of U.

What is the difference between mutation, variant, strain and lineage?

A mutation is a change in the genetic code, which is caused by errors in replication. These changes can lead to a change in nucleotides, which in turn can lead to changes in amino acids. Amino acids form proteins and these have a variety of functions in the organism. For example, SARS-CoV-2 uses the spike protein to bind with the human host cell. Altering this protein can for example cause the binding ability to improve (but also to worsen).

Variants are viruses that share a specific set of mutations. Strains are variants that lead to a change in viral properties, e.g. enhanced transmissibility. Depending on their severity, SARS-CoV-2 variants can be classified by WHO as VOC (variants of concern), VOI (variants of interest) and VUM (variants under monitoring). Lineages are usually used as a synonym for Pango nomenclature (e.g., B.1.1.7). They refer to a branch in the phylogenetic tree and help to classify the SARS-CoV-2 variants in an evolutionary context.

Where can I find Delta, Omicron, or other VOC and VOI?

With CovRadar, we are focusing on mutation information, independent of lineage assignment, to rapidly track SARS-CoV-2 evolution. There is a time delay before a new lineage is defined and especially with most sequences being Delta at the moment, it becomes increasingly important to monitor the pandemic at the mutation level.

With CovRadar you can investigate, for exmple, MOI S:L452R and MOC "Erik" S:E484K, two antibody escape mutations, or MOI "Nelly" S:N501Y, a mutation associated with better host receptor binding (Harvey et al.). For a good overview of which mutations are common in which VOCs, visit outbreak.info.

What is the difference between MSA, spike, genome and codon position?

MSA position is the position in the multiple sequence alignment calculated by CovRadar.

Spike position is the postion within the gene which encodes for the spike protein. The sequence refers to Wuhan-Hu-1 (NC_045512.2). Insertions are not numbered consecutively as in the MSA, but are indicated with ".X". So e.g. 100.2 describes the position of a second nucleotide insertion starting from the 100th position in the spike.

Genome position the position within the full viral genome Wuhan-Hu-1 (NC_045512.2). Insertions are indicated as in the spike position.

You can use our Position Converter (found on the right side of each app) to convert between positions.